Another successful walleye spawning bed restoration project was completed in the fall of 2017 on Sharbot Lake, in Frontenac County, in partnership with the Sharbot Lake Property Owners Association (SLPOA). Watersheds Canada received approval and funding from Fisheries and Oceans Canada to proceed with the fish habitat project for two sites on Sharbot Lake, one located on the East Basin and a second location on the West Basin. 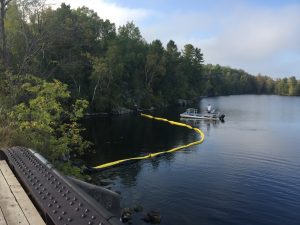 Setting up the silt curtain around the West Basin Restoration Site

Walleye spawn in the early spring for one to two weeks and return to the same spawning site each year. Some walleye populations spawn on shoals of lakes. Typical spawning sites include gravel shoals or rocky, wave-washed lake shallows. There needs to be flowing water or adequate wave action, to keep the spawning material clean and the eggs well oxygenated. Shoals used for spawning usually face the predominant wind direction and are not found in protected bays. The two selected sites fit the criteria and were known as historical spawning bed locations. 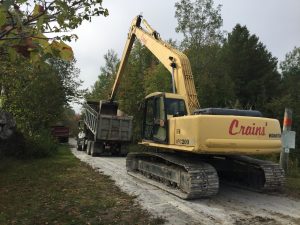 Melissa Dakers from Watersheds Canada spearheaded this project and engaged Anne Bendig, a fish biologist and co-chair of the Lanark County Stewardship Council. Watersheds Canada also contracted Arnott Bros. Construction Ltd.to provide the heavy equipment (including dump trucks and a large High Hoe), road traffic sign personnel and tons of washed river stone. SLPOA’s contribution was to supply a pontoon boat to extend silt curtains in the lake and volunteers to distribute the stones along the shoreline. 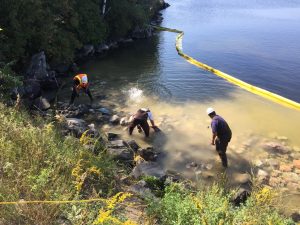 All was ready in late September to begin the work and the weather was sunny and warm. The West Basin site was the first to be done and work commenced early morning September 21st. Arnott Bros. arrived promptly with the washed river stone and heavy equipment. Silt curtains were arranged in the water to contain silt disturbed during the project. Thanks to Richard Struthers from Sharbot Lake Marina for volunteering and organizing this phase. Also thanks to Mr. Quinton Osmond for the use of his pontoon boat. 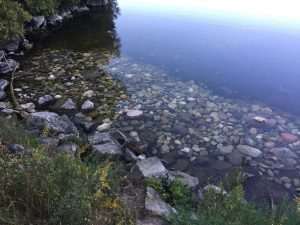 Once the large extended High Hoe had deposited the rocks into the lake, the SLPOA volunteers donned chest waders and entered the water to arrange all the stones to provide proper coverage on the spawning beds. The same work was successfully completed on the East Basin site the following day. By restoring these historic spawning beds, we can ensure that the walleye population of Sharbot Lake will continue to prosper for years to come. During the 2018 spawning period, volunteers observed numerous walleye already using the enhanced beds, success! 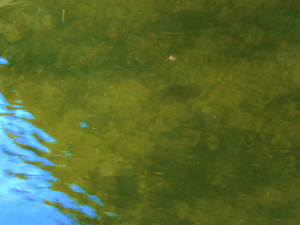 This entire project would not have been possible without the support of the many partners and volunteers who made it successful. It was a combined effort involving the Sharbot Lake Property Owners Association, Sharbot Lake Marina, Lanark County Stewardship Council, Arnott Bros. Construction Ltd. and Watersheds Canada. Special thanks to the Department of Fisheries and Oceans Recreational Fisheries Conservation Partnerships Program for the financial support in the competition o f the Sharbot Lake Walleye Spawning Beds Enhancement Project.