Most lakeshore residents in Ontario have likely heard of at least one aquatic invasive species and the significant threats they pose to freshwater ecosystems.

Some are hard to miss. Silver carp (Hypophthalmichthys molitrix) (not currently established in Ontario but at risk of entering the Great Lakes) are known for their propensity to leap metres out of the water in chaotic frenzies. Zebra mussels (Dreissena polymorpha) are prolific in many of Ontario’s lakes and rivers and coat the surface of rocks and even the shells of native freshwater mussels. Eurasian milfoil (Myriophyllum spicatum L.) is also a problem in Ontario, growing in thick mats that obstruct the growth of native macrophytes (aquatic plants).

While each of the aforementioned invaders are of great concern, what is often missing during discussions about aquatic invasives are those species which could literally balance on the tip of a pin, but who will wreak havoc on freshwater ecosystems when they become established.

Enter the spiny waterflea (Bythotrephes longimanus), a native to Europe that grows to only around one centimeter in length but whose massive populations have drastically altered the ecology of the many waters it has invaded. 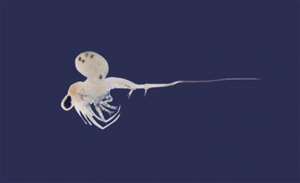 As its common name suggests, the spiny waterflea is defined by the barbed spine that makes up more than half its body length. This appendage makes the spiny waterflea unpalatable to many small and juvenile fish (Barnhisel, 1991; Compton & Kerfoot, 2004).

As these predaceous invaders consume and/or outcompete native zooplankton, there can be a serious decline in these species and a simultaneous drop in available food for young fish, leading to negative changes in aquatic ecosystems (Miehls et al., 2011; Barbiero & Tuchman, 2004; Strecker et al., 2011).

In many ways, the spiny waterflea might be considered the perfect aquatic invader: they are extremely small and proliferate quickly, they often lack predators in the ecosystem which they are introduced to, and they voraciously consume native zooplankton upon which the foundation of native food-webs rest.

What can be done about such a tiny and potentially damaging invasive species?

Invasions by non-native species are sometimes broken down into steps, which include transport, introduction, spread, and eventual establishment. Once established into an ecosystem, invasive species are notoriously difficult to eradicate, especially when they are small and in large numbers.

As of today, there are no practical means to eradicate near-microscopic invaders such as the spiny waterflea. Their small size and ability to spread rapidly mean that once established, they become a part of the ecosystem.

That brings us to the most important role that responsible lakeshore residents have in the struggle against invasive aquatic species: PREVENTION.

As mentioned previously, spiny waterfleas often form aggregates on structures ranging from fishing lines to pipes. It is believed that commercial and recreational fishing apparatus, including lines, provide an effective means of transport for spiny waterfleas between bodies of water (Rothlisberger et al., 2010; Branstrator et al., 2021). Recreational and commercial anglers must be hyper-cautious when transporting gear between waterbodies, as even one successful transport of a handful of individuals can lead to widespread establishment.

Another means of transportation for aquatic invasives, including the spiny waterflea, is on the hulls of watercraft, whether boats, jet-skis, or otherwise. If watercraft are being transported, it is essential that precautionary actions be taken to ensure all potential aquatic invasives are removed. Research from the Arnott Aquatic Ecology Lab and other research labs has investigated the effectiveness of different decontamination methods to prevent the transport of aquatic invasives via watercraft surfaces (Mohit et al., 2021).

The results of these studies show that several methods of decontamination are effective in removing invasives from surfaces, including:

Precaution and prevention. These are the words that should ring loud and clear for lake associations and their members when considering the spread of invasive species. Simple preventative actions, and the spread of information, will be the greatest line of defence for lakes that have not already been invaded.