Celebrated across Canada each fall, Terry Fox is a national icon. During the Marathon of Hope in 1980, Fox set out to run across Canada to raise awareness and money for cancer research. This cross-Canada journey took place over 143 days, 5,373 kilometres, and 6 provinces, leading Fox to run through 75 of Canada’s 1,382 sub-watersheds. These sub-watersheds were areas of land that caught falling precipitation, facilitating their drainage into nearby streams, lakes, rivers, and into the ground.

Terry Fox experienced the diversity, beauty, and hardships of both Canada’s terrestrial and water landscapes firsthand during his journey. April 12, 1980 marked the start of the Marathon of Hope when Fox dipped his leg into one of Canada’s five Ocean Watersheds, the Atlantic Ocean. It was the cold coastal waters of St. John’s Newfoundland where this historic moment began. 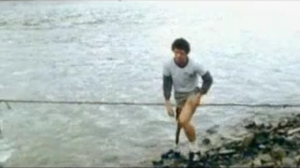 From St. John’s, the cool, moist Atlantic breeze took him across Newfoundland, Nova Scotia, Prince Edward Island, and up into New Brunswick. Fox was then greeted by the St. Lawrence River upon his arrival into the province of Quebec. The mist from this mighty river, the thirteenth largest drainage basin in the world, carried Fox southwest to the next significant water feature, Lake Ontario. While considered a small Great Lake in size, the Lake Ontario watershed is the most populated watershed in Canada. 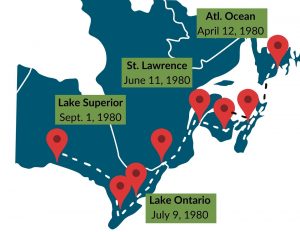 Terry Fox’s journey took him over 5,000-kilometres across Canada, from St. John’s NL to just outside Thunder Bay ON.

Fox followed the lake into Southern Ontario and onto the flat fertile land where rivers, canals, and wetlands are scattered throughout the agricultural landscape. While the flat terrain made running easier, Fox soon ventured into the Canadian Shield of Northern Ontario. With its iconic scenes of trees precariously growing into rocks only a short stretch from the water. He followed the Canadian Shield up around Georgian Bay, known for its crystal blue waters. He travelled along the North Channel and Lake Superior until September 1, 1980, the official end of his Marathon of Hope. His memory is forever looking out over the largest Great Lake at the Terry Fox National Historic Person Plaque outside of Thunder Bay, Ontario.

You can honour the legacy and memory of Terry Fox in many different ways. One way is through his foundation for cancer research which is still searching for a cure. Another is through caring for the Canadian landscapes he loved. A great way to do this is to learn about your local watersheds – look to your local Conservation Authority or check out the Government of Canada’s website to find out where you are located!