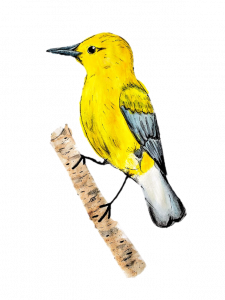 As the air starts to cool and the days become shorter, I can sense that it will soon be time to fly down south. It feels like just yesterday when I left the cozy little nest that my parents built for me and my four siblings. Our nest was in a humble wetland, north of Lake Erie. My father found a silver maple tree with the perfect little nook that was carved out by a Downy Woodpecker and started to build a nest from moss and bark. When he met my mother, she helped him turn it into our future home.

When the day came for me and my siblings to leave the nest, my parents warned us of the dangers we could encounter. My brother noted the lack of good swamps and wetlands there were around us to build a safe home in. They were all being destroyed by big, scary machines and turned into tall towers that the Humans called condos. My sister also expressed concern about the Humans removing standing dead trees that provide good, safe hollow cavities for building a nest.

In the near distance, I hear the familiar tweet of another Prothonotary Warbler. He flutters down to me with a bright chirp.

“Getting ready to migrate?”, he says and gobbles up a couple beetles. “Where are you thinking of going?”

I shake my golden-feathered head and tell him this will be my first time flying south for winter.

“Oh, how exciting!” He exclaims, “I usually fly down to Puerto Rico, but some of my friends have told me the mangrove swamps in Costa Rica are amazing! Of course, the Humans are making it a bit difficult to live in any of these places during the winter. They keep destroying good wetlands and forests to build houses and farms!”

“You should join me and my friends during our migration this year!”, says the other warbler. “We know all the best citrus groves and marches to stop for snacks. Oh, and my name is Lewis, by the way,” the warbler introduces himself. 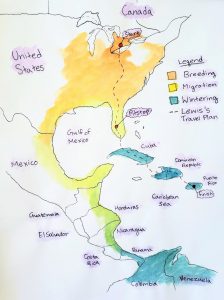 A map of the breeding (orange), migration (yellow), and wintering (blue) habitats of the Prothonotary Warbler. The dashed lines represent the travel plan described by Lewis in this story. Map sketched and painted by Priya Vaidya.

Lewis and I fly through the wetland forest, surrounded by silver maples, willows, and yellow birches, passing the familiar faces of American Robin, Black-Capped Chickadee, and House Sparrow before settling on the branches of a grand white oak tree. We are greeted by a group of excited Prothonotary Warblers, all chirping and tweeting warm welcomes to Lewis and enthusiastic hellos to me. They create a brilliant glimmer of bright gold against the dark green leaves of the white oak.

Lewis starts by going over the general path of the trip, “Since our trip went fairly well last year, we will spend winter at Puerto Rico again this year. We can fly down the east coast and make a pitstop at Florida. They have good citrus groves and marshes for food and water. Then, we will fly across the Gulf of Mexico, through Cuba, the Dominican Republic, and finally reach Puerto Rico. The whole journey should not take more than three months!”

One of the warblers in the group steps up with a concerned expression and says, “If we plan on flying through cities, we will have to be careful about flying into windows. We lost some good friends last year.”

My heart sinks. Flying into windows? Losing friends? No one told me migration could be this dangerous!

Lewis flies over to me, “I know you are scared but you should know that it is not as bad as you imagine. Yes, the Humans have made it harder for us to find good homes to build nests, but some kind Humans put up nest boxes that have good hollows where we can build nests. They even put guards around the nest boxes to keep predators away! And yes, it is possible to fly into windows in cities, but some kind Humans put up stickers on their windows and turn off their lights at night so we know where the windows are and can avoid them!”

I thank Lewis for reassuring me about the journey, and we both head back to the rest of the warbler group. I know that there are terrifying animals that will try to eat my and my future young, and Humans out there who can destroy my home, but now I also know that there are some nice Humans trying to make things not as hard for us. I should not let the possibility of bad things stop me from missing an exciting journey with my new friends! My first migration will certainly be an adventure.