Plastic is the most prevalent type of artificial debris found in our oceans and lakes. This debris can come in all shapes and sizes, but those less than 5 mm (0.2 inches or about the size of a sesame seed) in length are known as microplastics. These plastics enter natural ecosystems from a variety of sources, including cosmetics, clothing, and industrial processes.

Currently, there are two classifications of microplastics. Primary microplastics are defined as any solid plastic fragments/particles 5 mm in size or less before entering the environment. These include microfibres from clothing (Fig 1), microbeads and plastic pellets.

Secondary microplastics are microplastics that are created from the degradation of larger plastic products once they enter the environment through natural weathering processes. This type of microplastic includes water and soda bottles, fishing nets, and plastic bags breaking down to fragments and film (Fig 2). 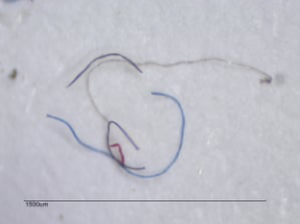 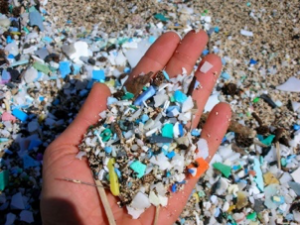 Both categories of microplastics are known to persist in the environment at high levels, particularly in aquatic ecosystems. Fibres come from such items as fleece clothing, diapers, and cigarette butts. It is estimated that 1,900 individual fibres are rinsed off per wash from a single, average garment. One fleece jacket can release 250,000 synthetic fibres. A polyester jacket can shed up to 1 million microfibres. A recent study funded by outdoor clothing company Patagonia, reported that up to 40% of microfibres traveling to wastewater treatment plants are not filtered out.

Impacts of Microplastics on Environment and Health

Plastics degrade slowly, often over hundreds if not thousands of years. This increases the probability of microplastics being ingested and incorporated into, and accumulated in, the bodies and tissues of many organisms including humans.

A 2018 study revealed that microplastics had been found in more than 114 aquatic species. They’ve been found lodged in the digestive tracts and tissues of sea animals. Fish and birds are likely to ingest microplastics floating on the water surface, mistaking the plastic bits for food. The ingestion of microplastics can cause aquatic species to consume less food and therefore, to have less energy to carry out life functions and it can result in neurological and reproductive toxicity. Microplastics are suspected of working their way up the aquatic food chain, from zooplankton and small fish to larger aquatic predators. There is concern that microplastics could harm human health as they move through the aquatic food web. Microplastics both absorb and give off chemicals and harmful pollutants. Plastics’ ingredients or toxic chemicals absorbed by plastics may build up over time and stay in the environment.

Additives added to plastics during manufacture may leach out upon ingestion, potentially causing serious harm to the organism. Endocrine disruption by plastic additives may affect the reproductive health of humans and wildlife alike. Plastics, polymers derived from mineral oils, are virtually non-biodegradable. That being said a recent study by the World Health Organization has recently concluded that ingestion of microplastics may not be cause for concern to human health at present although further studies are recommended to further determine risks. While there has been a lot of media attention on microplastics in the last few years, there has not yet been enough scientific research to indicate any clear or definitive statements about the impact of microplastics on the environment or on human health. Nonetheless, plastics are now truly ubiquitous globally in all types of waterbodies.

Sampling included select stretches within the Madawaska, Mississippi, and Tay River watersheds between June 22- Sept 14 2019. Sampling and analysis was carried out according to Florida Microplastic Awareness Protocol (FMAP). Thanks to D Smith, B. King and D. Donald for providing logistical support with offshore sampling and to Watersheds Canada for funding support.

Table 1 (below) provides a collation of overall findings from all the sites sampled. Observations were based on a total of 270 samples collected during 13 separate sampling events. The results indicated the following:

While any comparisons or specific conclusions drawn must be made with caution due to the general nature of the data collected, the main observation is that microplastics were found throughout all sections of the waterbodies sampled. It is important to note that sampling is conducted just below the surface. This means that, by its nature, this sampling technique could lead to overrepresenting lighter weight microfibres while possibly underrepresenting heavier particles such as beads and larger fragments that can settle into the bottom substrate over time.

Results revealed that the level of microplastics was relatively similar between the waterbodies sampled. The presence in samples (>90%) and relative amount of fibres to other types of materials (fragments, film) reflects that found in other studies. It should be noted that artificial materials were found in all reaches of watersheds sampled including both urbanized environments and more secluded less developed portions of the waterway. A number of recent studies (Dris et al 2016, Allen et al 2019) have revealed that not only can microplastics be transported through the atmosphere but can travel significant distances thus can reach and affect remote, sparsely inhabited areas through atmospheric transport. This can explain in part how these particles show up in less human populated and isolated waterbodies although more studies are required to further trace and quantify these airborne particles.

In a 2011 paper by Browne he voiced his concern that the high prevalence of plastic microfibres in the environment is more difficult to control than secondary plastics and microbeads, whose concentrations may be partially reduced through improved waste management and public policy phasing out the use of microbeads in cosmetics. Microfibres on the other hand come from multiple sources making it more of a challenge to mitigate.

With that in mind the following are just some of the ways to reduce microfibre release into the environment:

And above all make sure to support policies, programs, and organizations that work towards getting plastics out of the environment. After all, once plastics are in the environment they are here to stay!

Table 1- Summary of microplastics results from all sites