“Once Plastics Are In the Environment, They Are Here To Stay”

November 4, 2019 — Summer sampling led by Jean-Pierre (JP) Thonney in three local watersheds determined that out of 270 samples from 9 inland lakes studied, artificial materials (including fibres, fragments, and plastic film) were present in more than 90% of samples.

“We know that this is an issue in our oceans and large bodies of water but we wanted to know if microplastics were also a huge issue in our smaller freshwater lakes that have private sewage systems and no commercial wastewater treatment plants” said Barbara King, Executive Director of Watersheds Canada.  “Frankly, our findings were quite shocking considering we were finding microplastics in 90% of our samples, which were taken only in the top 1 meter of surface water”. A variety of lakes were sampled including both urbanized environments and more secluded, less developed portions of each lake. “What we thought would be a relatively microplastic-free lake (a clean, spring-fed lake with no public access and only 22 residential properties) still came up with an average of 3 microfibres per 1 litre of water sampled!”, said Barbara. 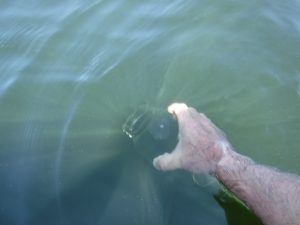 Microplastics are known to persist in the environment at high levels, particularly in aquatic ecosystems. Fibres come from such items as fleece clothing, diapers, and cigarette butts. It is estimated that 1,900 individual fibres are rinsed off per wash from a single, average garment. One fleece jacket alone can release up to 250,000 synthetic fibres.  A recent study funded by outdoor clothing company Patagonia, reported that up to 40% of microfibres traveling to wastewater treatment plants are not filtered out.

Once these fibres are in the aquatic ecosystem, they degrade slowly, often over hundreds if not thousands of years. In fact, a 2018 study revealed that microplastics had been found in more than 114 aquatic species. Fish and birds are likely to ingest microplastics floating on the water surface, mistaking the plastic bits for food. Microplastics are suspected of working their way up the aquatic food chain, from zooplankton and small fish to larger aquatic predators and humans. There is concern that microplastics could harm human health as they move through the aquatic food web.

“This study further confirms microplastics to be ubiquitous in our freshwaters – it is therefore crucial for us to act now to reduce plastics of all forms from entering the environment”, said JP Thonney, a volunteer with Watersheds Canada.

JP holds an MSc in Fisheries Science and Aquaculture from the Institute of Aquaculture at the University of Stirling in Scotland, as well as a BSc-Honours Degree from Memorial University in Newfoundland in the field of Fisheries Ecology.

Sampling and analysis was carried out according to the Florida Microplastic Awareness Protocol. This project was made possible because of logistical support from D. Smith, B. King, D. Smith, and D. Donald, and with financial support from the Daniel and Susan Gottlieb Foundation.

The results of the testing mean that no matter where someone lives, reducing microfibres released into the environment is needed. Some simple actions include:

For more information about this project, please contact JP Thonney or Barbara King at info@watersheds.ca or read the full report here.