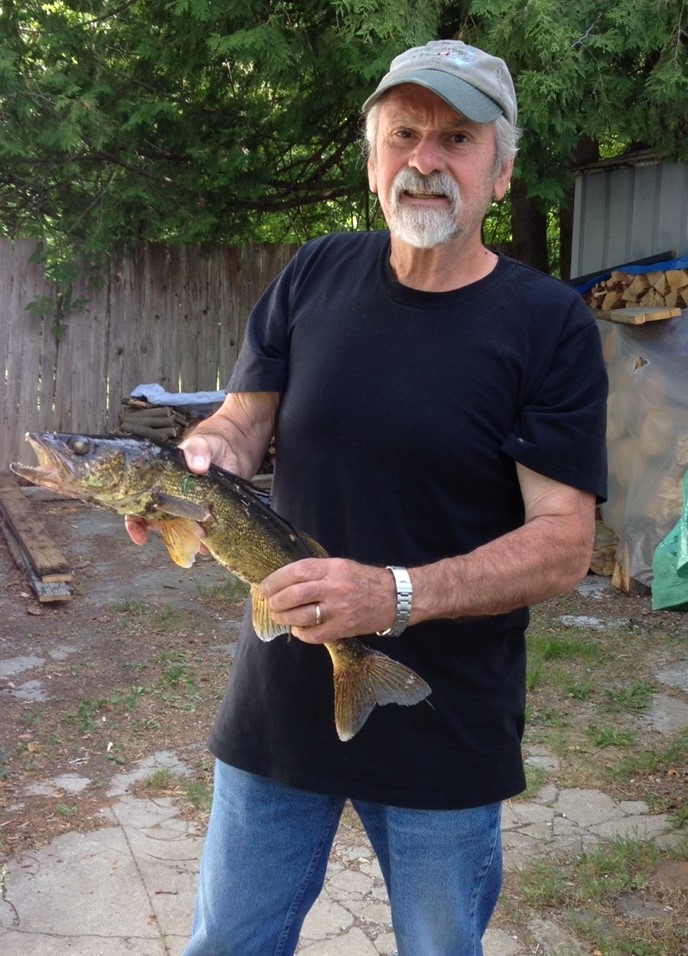 My father and I have had a friendly debate going for a number of years regarding the name of a particular sport fish. And as my career in fish habitat restoration has established, I am finding this is common debate amongst many Ontario outdoors people.

As a long time fisherman, my father has always referred to the common fish species Sander vitreus as a pickerel, and when I was younger, who was I to argue with him. Growing up my father instilled in me, my love for the outdoors, from many hikes in our local conservation areas, to family vacations at various cottages near Georgian Bay and North Bay. One of my earliest memories is of lying beside the Northern Pike that my dad caught when I was 3 years old. I was the same size as the fish which is still proudly displayed above his fireplace (the fish…not me!) Fishing has always been something that I have had in common with my dad, from river fishing, to ice fishing; it is something we will always share.

So when I decided to study environmental sciences in school, it was pretty clear that I wanted to focus on protecting those ecosystems that we both loved. What I didn’t realize was that it would question the knowledge of the man who had been my first teacher. When I took my first biology/fisheries courses, I learned a lot about the largest member of the perch family, the walleye and I was very excited to share this information with my dad. But that was when it began…the big debate! He placed his hand on my shoulder and said, “Oh, you mean Pickerel.”  Confused, I said to him “no walleye” and showed him my notes and then proceeded to explain the difference between walleye and pickerels. He laughed it off and said that everyone called them pickerels and that they might not be teaching the correct terminology.  Truth be told, that I did realize that depending where you are from, many fish, and animals for that matter, can be referred to by different common names, and neither are right or wrong. I just like to push my dad’s buttons.

Over the last 20 years, my dad and I have jokingly gone back and forth over this issue until recently. He showed me an article from a provincial fishing magazine which explained the differences between Walleye, Sauger, Pike and Pickerel. I was so excited it was the same info I had been explaining to him all these years. Finally I was going to prove to him that I was right. After reading the article he looked at me said, “See, I told you it was called a “walleye” not a pickerel!”  Smiling to myself, I laughed and thought who was I, to argue with him.

Want to know the difference between a Walleye and Pickerel?

It should be noted that common names of fish could be culturally different depending on the region that you live. Walleye are often called pickerel, especially in English speaking parts of Canada, while in the United States of America, they call the same species (Sander vitreus) a walleye. The same thing happens with another fish, with some people calling a Rainbow Trout (Oncorhynchus mykiss) a Steelhead. Neither are right or wrong; they are a cultural preference. For the sake of this article, and the friendly debate between my father and me, here are the differences between a Walleye (Sander vitreus) and a Grass Pickerel (Esox americanus vermiculatus):

Walleye (Sander vitreus) are the largest members of the perch family. They are a cool freshwater fish, native to most of Canada. The walleye is named for its pearlescent eye that helps them see and feed at night or in murky water. They are often found in deeper water, especially when the climate is warm.

Pickerel – the term pickerel is reserved for small fishes in the Pike Family. Grass Pickerel (Esox americanus vermiculatus) are a species of special concern in Canada. They are found in shallower waters, and are long and slender, resembling and often mistaken for its more northern cousin…the Northern Pike. (But that I will tell you about that another time!)

Whatever you call this fish, you can rest assured that Watersheds Canada’s fish habitat restoration projects work to restore their spawning areas. For over seven years, Watersheds Canada has worked alongside community groups and local volunteers to restore historic walleye spawning beds and ensure local populations stay healthy for years to come. How do we do it? You can learn about past walleye spawning bed projects on our Fish Habitat Projects webpage, or by reading our free and accessible Fish Habitat Enhancement Toolkit (created in partnership with the Lanark Stewardship Council).